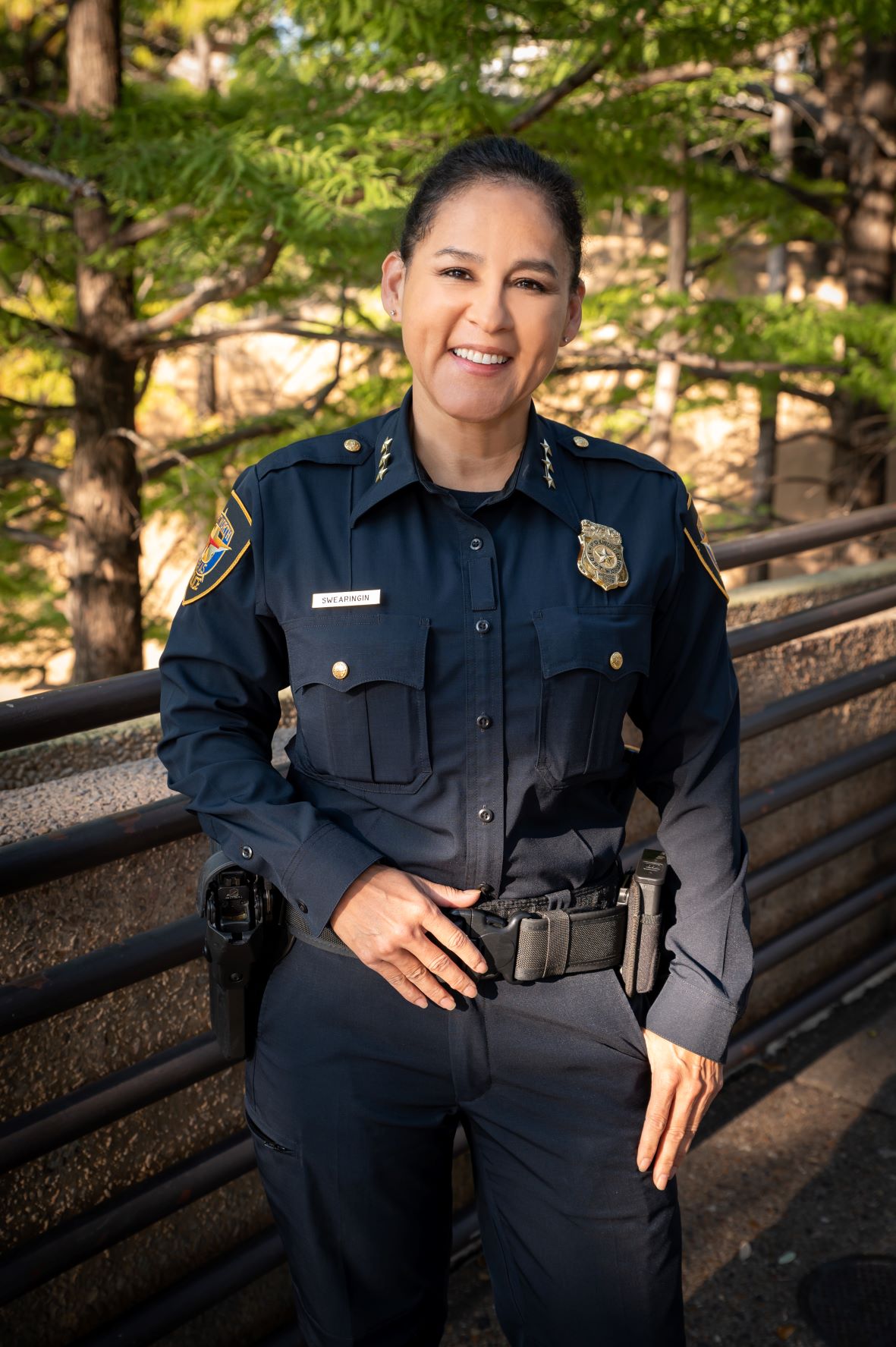 Some people know at an early age what profession they will pursue. That wasn’t the case with Assistant Chief Julie Swearingin. But Swearingin had always had respect for those working in law enforcement and desired a career where she could support her young children, be a positive role model for them and help others and found the perfect fit in law enforcement. She received a bachelor’s degree in criminal justice from Tarleton State University, is a graduate of the FBI National Academy, has a master peace officer license and a Texas Commission of Law Enforcement Instructor certification all of which make her imminently qualified for her current role as Asst Chief.  Swearingin’s law enforcement career includes work as a Tarrant County Constable and a Mansfield ISD police officer. She has been a member of the Fort Worth Police Department for more than 27 years and has had a relatively smooth journey being promoted through the ranks at a steady pace. She is the first Latin American woman to achieve the rank of Lieutenant in the FWBP, as well as the first to hold the position of Asst. Chief. Her tenure with the Fort Worth Police Department includes assignments in the following: Patrol, Gang, Training Academy, School Liaison, Detective office, Internal Affairs, Criminal Investigations, Special Victims Section, Chief’s Office, Special Investigation, Tactical Operations and Operational Command. Swearingin has received multiple awards and recognition during her tenure with the department, including: Bureau Officer of the Year, Bold Woman Award, First Responders First in Excellence Award, Women of Worth Award, Hispanic National Law Enforcement Outstanding Achievement Award, Fort Worth Business Press Woman of Influence and was honored by the United Hispanic Council of Tarrant County.  In addition, she received the Trilogy Award for completing the FBI-Leadership Executive Development series.

The perception of those in law enforcement is not always the best, especially in underserved communities, but Swearingin is working to change that. She believes intentional recruiting is part of the solution and has created the initiative, “Be the Change”, to focus on recruiting women and minorities. The initiative incorporates a personal outreach component offering support and mentoring, physical fitness preparation and guidance for those interested in joining the police department. The support starts at the very beginning of the process and carries through until the applicant graduates and becomes a police officer. Swearingin says, “I see the value in diversifying the police department, not just diverse demographics, but diverse perspectives, experiences, opinions and upbringing.” With the short time this program has been in place, the department has witnessed positive results and diversity numbers have slightly increased. Swearingin whole-heartedly believes that Be The Change will enhance the departments diverse recruiting efforts while strengthening police/community relations in our city.

To read the full story about Julie Swearingin, click on the cover of the October 2022 issue